From Nerds Without Borders
Jump to navigation Jump to search 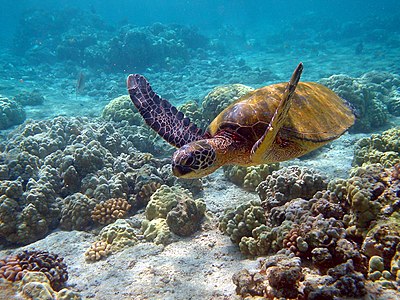 Sea turtles have existed for 100 million years, but in the last century, the impacts of man through accidental capture in fishing nets, habitat destruction, pollution, and plastics in the ocean have significantly reduced populations by as much as 95%. Six of the seven species nest in the warmer beaches of the US, and all of these are protected by the Endangered Species Act of 1973. Although volunteer groups and park personnel can identify egg-laying sites almost immediately, the hatching date (when they emerge onto the beach) cannot be predicted—it will happen sometime in a six-week period beginning 50 days after the eggs are laid. All 100 to 150 of the sea turtle hatchlings in a nest usually appear simultaneously (mostly at night) on some unpredictable date during that six-week period. The hatchlings “boil” out of the sand and begin a dash to the ocean, one of the most touching sights in nature.

Beginning at 50 days after the eggs are laid, the National Park Service (NPS) at the Cape Hatteras National Seashore fences off a lane from the nest to the ocean and forbids other access to that lane until either the hatchlings appear or the 100 days has elapsed. This long protection period creates conflicts with other uses for beach access, such as fishing and vehicular movement for recreation and safety. Conflicts are inevitable, often leading to lawsuits.

This project is developing technology to help protect sea turtle hatchlings at their first crisis: emerging from the egg and making it to the ocean. Hatching happens on an unpredictable day sometime during a six-week window beginning 50 days after the eggs are laid. Predicting the hatching date to within a few days is the goal of this project.

The goal of the project is to develop simple, inexpensive technology for determining when a "boil" will occur with as much accuracy and reliability as possible. The current design employs a sensor that measures egg motion either as the embryos agitate in the egg or as the sea turtle hatchlings begin to pip out of the eggs or both. The results, perhaps including modeling, will hopefully be able to predict hatching dates (arrival on the beach) to a reliable one-to-three-day window, a significant improvement over the current six-week window. Developing a reliable technology for predicting hatching will allow the NPS to create a new protocol for protecting the nests, thus freeing up access to the beaches for a significantly longer time.

There are several possible beneficial side effects of the technology:

All the designs and software code will be published on this website and will be available for use worldwide. All data created by the system will be made available to researchers worldwide.

The device began with an idea from Eric Kaplan, founder of a company that develops Bluetooth wireless technology test equipment. Kaplan sold his company to his employees and later founded the Hatteras Island Ocean Center (www.hioceancenter.org), a nonprofit, 501(c)(3) ecology education center on Hatteras Island in North Carolina. Kaplan saw the need for this technology and approached his childhood friend Tom Zimmerman, an IBM Research–Almaden (San Jose, CA) electrical engineer for assistance. Zimmerman designed the sensor package in 2013 as a public service commitment from IBM. Tom recruited his college buddy, Samuel Wantman a retired software designer, and they worked on developing the first phase of the design with support from IBM and from the National Park Service. Britta Muiznieks, a biologist with the NPS has been coordinating the Park's involvement. The first phase of the project was a very quick and inexpensive hack of cell phones with a simple custom circuit board to test the viability of the project. The devices were tried in a few nests in 2013, but unfortunately it was too late in the season to get any data from viable nests. Even so, there was enough learned to make everyone involved in the project believe that there was the potential to make the technology work.

Wantman took over management of the project in 2014, as Zimmerman had to return to other commitments at IBM. Additional volunteers were recruited, including David Hermeyer a retired electrical engineer and Charles Wade a retired IBM Research manager. Phase Two of the project involves developing a more robust custom sensor embedded in a plastic sphere the same size and shape as a turtle egg, with industry standard technology for transmitting data over cell phone networks. Installation has begun on multiple sensors that the NPS is funding for field testing in 2014. The project inspired Samuel Wantman to start Nerdswithoutborders.net to help organize the project, recruit volunteers, and inspire other projects. All of the Turtle Sense project members, with the exception of the NPS employees, donate their time. The Hatteras Island Ocean Center is the sponsoring non-profit institution that administers receipt and disbursement of funds for materials and other expenses.

A ping-pong ball sensor assembly placed in a sea turtle nest (field tests 2013). The cable coming from the sensor leads to the communications tower for the cell phone connection.

Phase One was a proof-of-concept field test undertaken during the 2013 turtle season. A motion-and-temperature sensor (Analog Devices ADLX362, 3-Axil, Digital Output MEMS accelerometer), soldered to a Sparkfun “breakout board,” was soldered to a CAT5 cable. The board was sealed in a Ping-Pong ball by filling it with “aquarium safe” silicone caulk. The Ping-Pong ball, about the size and shape of the sea turtle eggs, was placed in the sea turtle nest by National Park Service (NPS) rangers. The other end of the cable attached to the "egg" assembly was electrically connected to a hacked cell phone that was programmed with a very small, low-powered TI MSP430 microprocessor. The phone sent out text messages with the motion and temperature data every two hours. The cell phone was protected from the elements by a communications tower made from 4" PVC pipe and pipe fittings.

Turtle eggshells are thick and leathery, so the hatchlings need considerable effort to emerge from the egg. After leaving the egg, the hatchlings remain in the nest for two-to-four days before exiting (usually) as a group onto the beach. All the resulting motions should activate the accelerometer sensor and thus provide data to the phone network. Though the first device had its problems, field tests done at Hatteras in October 2013 were positive. The signal from the sensor close to a single hatchling was eight times larger than the background signal, giving hope for more extensive tests planned for 2014.

Planning for Phase Two began during the implementation of Phase One. Samuel Wantman and David Hermeyer began working on the design for a more robust solution in the Fall of 2013. Units were installed by the NPS starting in June of 2014. About a dozen nests were monitored and predictions were made as to when the hatchlings would emerge.

Several problems were identified during Phase One that we tried to address in Phase Two:

The 2014 communications assembly contains the circuit board, power supply, a microprocessor, an M2M cell phone board and RS485 transceiver. Inset is a quarter for size reference.

In 2015 we started to automate the graphing of data, and used the graphs to successfully predict emergence of hatchlings

We successfully monitored nests at the Cape Hatteras National Seashore.

For graphs of the nests that were monitored see: Turtle Sense / 2015 Season Results

Work on phase three began after the end of the 2014 season. The goals of Phase Three are:

Most of the technical work to make this happen will be done during 2015. The phase two equipment will be used until the phase three equipment is ready.

Work is underway modifying the Turtle Sense hardware and software.

Data from the first report of the 2014 season

The Turtle Sense units constantly monitor and analyze motion to create a profile of its magnitude over time. The motion detector measures the change in acceleration (or "jolt") multiple times per second. The magnitude is squared and summed. After six minutes, the results are stored in a record along with a temperature and orientation reading, and the process starts over. The sum that results is roughly the total energy recorded in the nest during the period. This process allows us to compress several thousand readings into approximately 32 bytes of information. We lose but we suspect that those details are not important. The 240 records created each day give us a very good idea of what is happening in the nest. Once 40 days have passed, we restart the process of summing every minute to get more detailed data.

There has been some research that indicates that before emerging from the nest in a "boil," turtles that have hatched congregate underground near the top of the nest. It is thought that this motion stimulates the hatching of the turtles that haven't yet emerged. Our sensors, situated at the top of the nest, were able to record some noticeable disturbances several days before the turtles boil. We were able to see these disturbances in the data in almost all of the nests that we monitored in the 2014 season and were able to predict the date of the boil within a window of a few days.

Predictions from the data in 2014 were made by human observation of graphed data. We will be generating algorithms to predict hatching from our data and refining them to come up with a reliable automated process for predicting hatching a few days in advance.

A few days after the first units of Phase Two were installed, Hurricane Arthur hit. The units reported regularly before and after the storm without any problems. This picture was taken the day after the storm. Notice how all the text was sandblasted off the sign in the forefront. Cape Hatteras Lighthouse is just behind the dune.

The National Park Service has been funding the project since it began. Labor is being provided by NerdsWithoutBorder.net volunteers. Additional support has come from:

We are seeking funding and volunteers to expand the program.

Success in this project would provide widespread, international advantages. As noted above, the stress could be lessened between the protection agencies and the fishing industry, recreational users, and tourism advocates, all of whom desire more beach access. More effective international protection will be available, since the protection resources can be concentrated close to the hatch date instead of being stretched over six weeks. With a tighter hatching schedule, the public would have the opportunity to observe the hatchlings heading for the sea, an observation available only randomly now. This would improve the public support of the turtles. NPS will use the hatch dates in on-site announcements and information centers, and the Hatteras Island Ocean Center will disseminate the information in their programs. Much of the research on sea turtle eggs and hatchlings in the world could benefit from more accurate predictions of the hatch date. For example, studies that require capturing hatchlings for research could be done with much greater efficiency. Also, the sensor/cell network could be adapted for measurements of other species, including birds. Given its modest cost and energy efficiency (long battery life), it may have other uses in environmental studies. All the design information will be available to the public on the wiki http://nerdswithoutborders.net. If the project is successful equipment will be made available at cost or perhaps below cost if sponsors come forward.

Britta Muiznieks, a wildlife biologist at the NPS Cape Hatteras Seashore in NC with a protected turtle nest. The 4" PVC pipe assembly tower was used in the 2013 testing. A smaller 3" structure holds the 2014 package because the electronics are smaller and AA rechargeable batteries have replaced D cells. Vandal-proofing is one aspect of the design. Britta does the field research for the NPS.

If you would like to help with this project, make suggestions, or offer a critique, please email: admin@nerdswithoutborders.net.